I haven't had much of a chance to cook this past week, so I bring you my first post about dining out. I spent the last weekend with my boyfriend (herein referred to as The BF) in Portland to eat, relax, and shop at Powell's, where we picked up more than a few guidebooks to aid our upcoming vacation in Tokyo.

We're more than excited about visiting Tokyo for the first time. We want to learn more about Japanese culture and food. In Portland, we found a little Japanese restaurant called the Hot Pot 'n Sushi. They serve fresh sushi on a conveyer belt and the patrons can select what they want and grab it off the belt and gobble it up.
We decided to go for the Shabu Shabu, which translates to "swish swish" in Japanese. For those unfamiliar, it's a fondue of sorts (hence the name Hot Pot). Instead of cheese, the Japanese use broth. it goes like this: there's an electric burner in the middle of the table where a stock pot is placed. It's filled with hot broth, usually seasoned with bonito flakes. There are also bowls filled with raw veggies, mushrooms, udon noodles and meats. 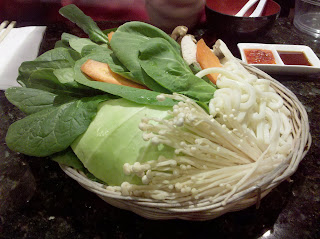 The diners cook the goodies in the hot broth, scoop them into their bowls, and then slurp it up while trying not to burn their mouths. The broth gets increasingly more flavorful as more goodies swish around in it. There are also dipping sauces provided: usually a ponzu sauce for the veggies and a saltier soy-based sauce for the meats.
This was the first time I've had a hot-pot style dining out. It's a fun way to dine.

Growing up with Chinese parents, we had our version of hot pot at home as well. On special occasions, my parents brought out the electric wok, filled it with broth, and we cooked up seafood and Chinese bean thread noodles on our dining table. Scallops, shrimp, oysters, clams and mussels would get cooked in the broth and dipped into a salty mixture of green onion and ginger. Yummy!

The Japanese version isn't much different from what I'm used to. Though the typical ingredients are different, the method is the same. And it was a great American introduction to Japanese cuisine that wasn't just about sushi or teriyaki. We're looking forward to exploring more.
Posted by ShoeboxChef at 9:10 PM